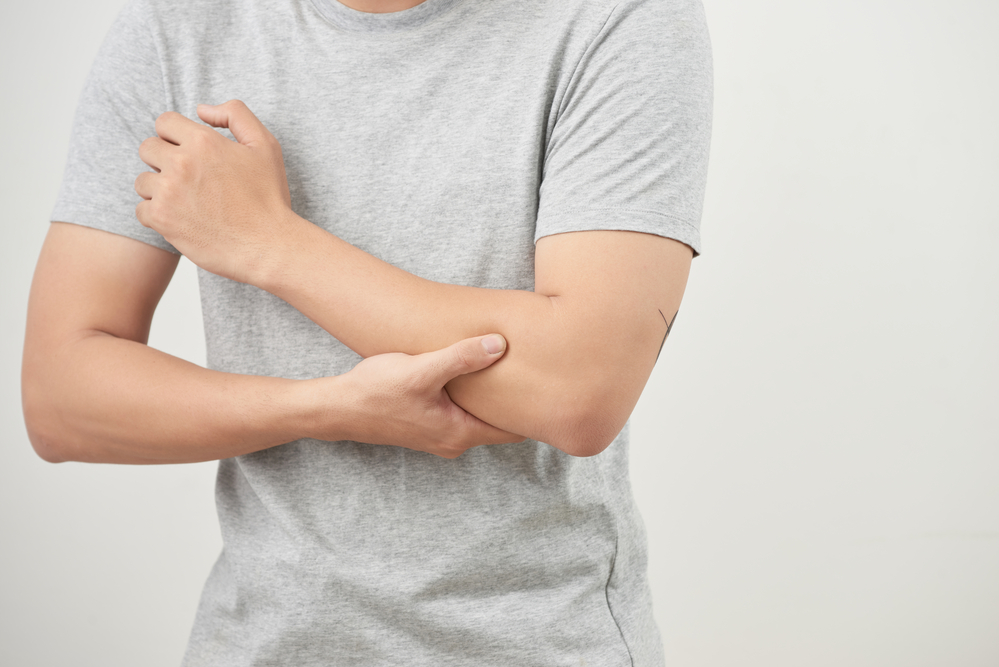 Tendinitis of the Elbow

Whether you’re an athlete, blue-collar worker, casual runner, or weightlifter, anyone can fall victim to tendonitis. If you find yourself with a new, seemingly constant pain, tendonitis may be the culprit.

Tendonitis is an overuse injury caused by repetitive movements or constant stress on a particular tendon, eventually leading to inflammation of the tendon. It’s nothing severe, but it can turn severe if left untreated. The best, or at least first, treatment for tendonitis is to simply rest the area until the pain and inflammation subside as part of the RICE technique (Rest, Ice, Compression, Elevation). Other treatment options include anti-inflammatory medication, steroid injections, splinting and exercises to improve flexibility and correct any imbalances that lead to the injury—such as a week or inflexible calf muscle that requires the achilles to take on more work than intended.

It’s important to not push through the injury as this can lead to further damage and potential tears. And trust us, you do not want to tear some of the joints where tendonitis is frequently found.

Contrary to its nickname, tennis elbow isn’t limited to just the sport of tennis. The condition stems from inflammation of the tendons joining the forearm muscles and the elbow. Patients will feel the inflammation and pain on the outside of their elbow. Racketed sports, weightlifting and any activity that requires repeated use of the elbow can lead to tennis elbow.

Sesamoiditis is inflammation of the tendons which connect the sesamoids—bones not connected to any other bone, but connected by tendons—such as your kneecap.

Sesamoids allow tendons to slide along the area to transmit additional muscle forces. These tendons can become inflamed or irritated with overuse, leading to pain and discomfort. If you’ve ever had “knee tendonitis,” this is it.

The rotator cuff is a common culprit for shoulder pain in people of all ages, but especially for athletes and even more prominent for those participating in throwing sports. Repetitive use during training and while playing the sport itself leave athletes increasingly susceptible to overuse of the rotator cuff.

In addition, people who work physical jobs are more susceptible to overuse than those in a cubicle or office. Those who do overhead activities such as construction, maintenance and other tasks which require repetitive overhead movement may experience pain from time to time.

Common symptoms are swelling and tenderness, pain when raising your arm, and the arm ascending back to a downward position from upward. This pain isn’t excruciating, but it can get worse with time. It will also be present during both activity and rest. Sometimes the pain may arise only during sudden lifts or use of force. It’s really a case-by-case phenomenon.

Also known as jumper’s knee, the patellar tendon is often the victim of tendonitis. The patellar tendon becomes weaker from overuse and sometimes even causes small tears. While some people choose corticosteroid injections, the best treatment is rest, as studies suggest injections can weaken the tendon and increase the chances of rupture.

Do I actually have shin splints?

Maybe, but you might not. While there are multiple causes for shin splints, tendonitis is one of the more common culprits. The tendons attaching the muscle to bone may become inflamed, causing pain and discomfort, especially if there is a partial tear. Resting the area usually solves the problem.

Most cases of bicep tendonitis stem from a lifetime of use. Our bodies slowly degrade over time, and this degradation is magnified by overuse.

The Achilles and surrounding tendons

← After Joint Replacement Surgery: What to Know if You're the Caregiver, Part ll Common Broken Bones →